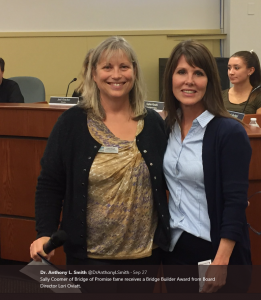 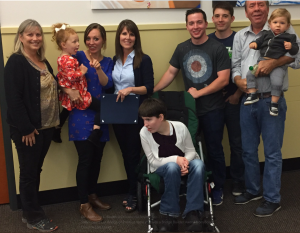 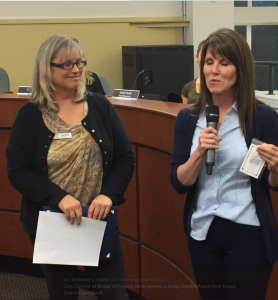 What can I say about Sally Coomer? What can I NOT say about Sally Coomer? She is an amazing friend and an amazing person. One of the great honors bestowed upon a school board director is the opportunity to present our community members with awards. We present a couple of awards to community members: Community Service Award and the Bridge-Builder Award. This year’s Community Service award went to the Irwin Group.

The Bridge-Builder award consists of a lapel pin and poem given in memory of Donna Polacek, the district’s Personnel Director, who always went the extra mile to give much more than was expected to the staff and students of Riverview.

Each recipient’s pin is numbered and recorded commemoratively in a record book located in the Superintendent’s Office. Beginning in 1997, 209 individuals have been named Bridge-Builders by the Riverview School District. Here is what I wrote on the nomination form:

Sally Coomer is one of those amazing people who is gifted with great vision. She is someone who sees a need then determines a way to fulfill that need. Sally has raised many children who have gone through RSD; however because of one of her kids – Becky – Sally became an advocate for thousands of students who have entered the doors of the RSD. Sally created the Bridge of Promise Academy to support our students who have graduated and need additional education. Her Bridge of  Promise Day Camp provides volunteer opportunities for Riverview’s High School students and  her company Special Care Agency has employed many people in the valley.

About the author: Lori

Lori Oviatt has served on the Riverview School Board of Directors since 2006, she lives on an acreage in the wild woods near Lake Joy and loves to serve in the public school system. She is a Learning Solutions Provider for many corporations and non-profits around the globe. She loves to talk education and learning!
TOP